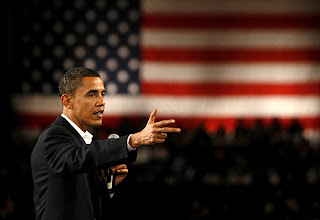 Can we learn anything from Senator Barack Obama's victory in the Iowa caucuses?
The answer is: yes, quite a lot.

Whilst it is far too early to predict that he will win the Democratic nomination, Senator Obama has shown us how political narratives can work.

He understands that a political narrative is a story that generates particular emotions by tapping into familiar archetypes and genres and engaging both the heart and the head.

In her books, The Story Factor and Whoever Tells the Best Story Wins, Annette Simmons discusses three types of story: “Who am I?”, “Why am I here?” and “My vision”.

By telling these types of stories, Senator Obama did the best job of getting Iowa Democrats to have positive feelings about him.

In The Audacity of Hope and Dreams from My Father and his keynote speech to the 2004 Democratic National Convention (that first brought him to national attention), Senator Obama set out his 'Who am I?' story.

We learn how a black man born in Hawaii to an immigrant father – who himself was born and raised in a small village in Kenya and “went to school in a tin- roof shack” - and a white, single mother struggled with a multiracial background and a broken home gained a world-class education and went on to become the first black man to edit the Harvard Law Review. This is a uniquely American story of identity and hope: Obama embodies the notion that new things - change – can happen in America.

Obama’s '”why am I here?” stories explain why and how he would: promote innovation and upward social mobility; protect workers against the consequences of globalisation; ensure that more people can have access to healthcare; build a better “safety net” for poorer people; cut taxes for low income senior citizens and repeal tax cuts for the wealthiest 1 percent of Americans; and crucially, widen access to education.

By telling these stories, Obama sets out his vision : “with just a slight change in priorities, we can make sure that every child in America has a decent shot at life and that the doors of opportunity remain open to all”.

One archetype he taps into is a sense of possibilities – hope, aspiration and opportunity. Another, closely linked archetype is a transformation, a cleansing by rejecting the "old" and tarnished (in this case, politics) in favour of the “new”. (“There’s not a black America and a white America . . . a liberal America and a conservative America . . . there’s a United States of America”) Obama’s story is that he can end the bitter culture wars, as embodied by the Bushes and Clintons, and unite the nation around a common purpose.

Yes, politics in this country and in the US work differently. But both cultures rely on stories and archetypes.

Footnote: In this interesting piece, Ruth Marcus of The Washington Post says that "what was striking . . . was the pull of Obama's optimistic, inclusive message and the way his well-oiled field operation was able to translate that appeal into caucusgoers". She argues that Senator Obama and Mike Huckabee, victor in the Republican caucuses, both won because they talked about rising above partisanship to unite the country and solve its problems.
Posted by Neil Stockley at 15:54